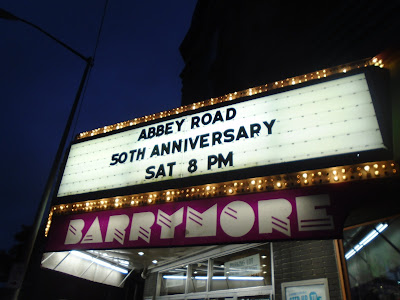 Dedicated to Vanessa Beardsley, whose striking, surprising words to me during the intermission embraced me as powerfully as her arms.

And to Diane Robinson, an exemplary Music educator and priceless, beautiful human spirit, who is a gift to every child that has ever been in her care, and for every person who has ever taken a moment to know her.

All Summer long I had seen the following poster around the city... 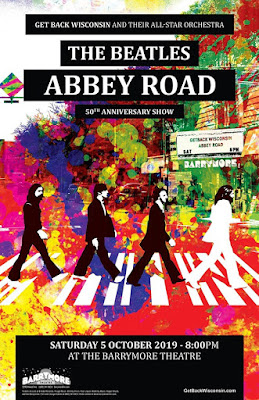 On kiosks, on storefront bulletin boards, inside businesses, restaurants and of course, records stores, I had seen the poster and small handout flyers advertising this performance and each and every time, the image would make me pause.

Madison Mystery Tour, formerly known as Get Back Wisconsin, is a collective of local Madison, WI musicians who (ahem) come together to perform the music of The Beatles, most notably for the 50th anniversary of each album's release.

Yes, this is a tribute band but not exactly what one might think, for Madison Mystery Tour does not attempt to re-create Beatlemania so to speak. There are no costumes. They do not perform in character or as any characters from Beatle songs. They do not use pretend English accents either. This is a tribute band in the sense of witnessing completely devoted music students and educators in action. Beatle fans committed to learning the entire catalog of The Beatles and performing every song to the very best of their abilities, like and orchestra performing the music of Mozart for instance, or what I have seen (three jaw dropping times now) with Dweezil Zappa's bands performing the music of his Father, the late Frank Zappa.

And to raise the stakes with this on-going project, this collective actually engages themselves with performing quite an enormous amount of material that The Beatles never performed live themselves as they ceased touring in 1966--therefore, material from albums like "Revolver" (released August 6, 1966), "Sgt. Pepper's Lonely Hearts Club Band" (released June 1, 1967) and yes, indeed "Abbey Road" (released September 26, 1969), never saw life on stage...

...that is, until Madison Mystery Tour came along!

With Madison Mystery Tour, or rather under their former band name, I had heard of them but never found myself fueled with enough interest in attending a show. That is until this Summer, seeing the poster advertisement over and again. Something spoke to me this time. And lovingly so.

Perhaps because The Beatles' "Abbey Road" is not only my favorite Beatles album, it is my number #1 favorite album of all time. It is the album that entered the world months after I did, meaning that we both have hit the five decade milestone. I have been told that Side Two of the album was played for me as an infant every time I cried, the music soothing me to calmness and then, sleep. So, in essence, my life and the life of "Abbey Road" are intertwined. Perhaps it even resides within my DNA.

Because of that, I knew that I had to attend. 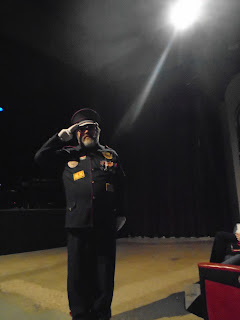 It was a chilly, rainy night in Madison on the evening of the performance. Yet, inside of the Barrymore, there was palpable warmth as the night's SOLD OUT audience, including Sgt.Pepper himself (pictured above) filed in, claimed their seats and spots at the stage area and all in anticipation to be entertained and bask in a shared experience through our mutual love of The Beatles. 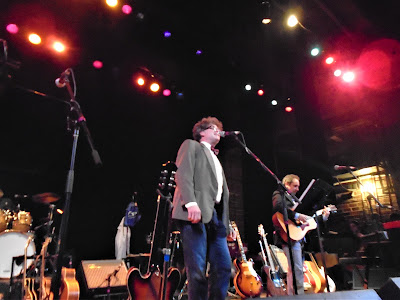 As the show began, the primary sextet of the Madison Mystery Tour band members (and often augmented by a full string section, horn section and sound effects) entered the stage, and opened the performance with a few warm-ups before the evening centerpiece of "Abbey Road." Going through a series of selects songs from albums and tours past, we were treated to a strong and unpredictable collection of Beatles' material spanning from 1965-1968.

Opening gently with "Yesterday," and flying through songs like "The Word," "Getting Better," "I Want To Tell You," as well as "And Your Bird Can Sing," Madison Mystery Tour instantly won me over as their musical diligence and sheer enjoyment of being able to perform this material on stage was infectious. This wasn't a matter of having them exactly replicate The Beatles, so to speak.  The band did not take it upon themselves to necessarily become the Fab Four. But what I heard and saw
were representative of the music itself and it warmed me to see how much fun they were having as well as their intense dedication to getting it all just right. 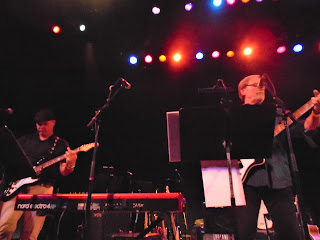 I was immediately impressed with the group's vocal harmonies (no small feat whatsoever), as well as Bassist Steven Morgan's mastery of Paul McCartney's now iconic and highly demanding bass lines 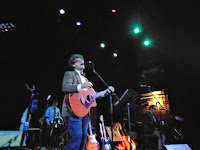 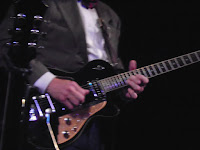 With his fully engaging vocals, plus expertly delivered guitar leads, the bespectacled, bow-tie adorned Sean Michael Dargan --who, to my eyes, made me think of a figure like Buddy Holly crossed with Composer/multi-instrumentalist Jon Brion--made for an excellent focal point, staged front and center, holding down the proceedings with skillful ease. 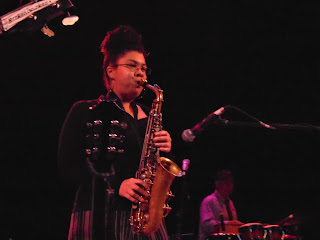 The show hit its first peak with the arrival of two improbable and exceedingly well performed selections The Beatles never performed live, the psychedelic wonderland of "I Am The Walrus" and the bizarre, hysterical, novelty act that is...believe it or not..."You Know My Name (Look Up The Number)," during which Saxophonist Miesha Ihm just nailed Rolling Stones founder Brian Jones' guest horn part on the original recording. 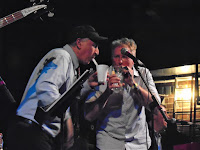 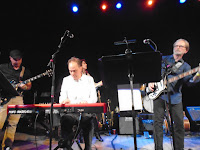 Next, it was time for the main event, the full end-to-end performance of "Abbey Road," which began, just as the album, with the aggressive, bluesy surrealist call to unity that is "Come Together," which was gorgeously followed up by the sublime "Something" and the sinister, sing-a-long children's ode to a psychopath in "Maxwell's Silver Hammer," the wailing "Oh! Darling" (DAMN, Sean just got those McCartney screams!!!), the jaunty children's underwater fantasy of "Octopus' Garden," (complete with the song's origin story and bubbly sound effects performed live) and the epic Side One closing guitar army of "I Want You (She's So Heavy)."

As Madison Mystery Tour left the stage for a brief intermission (emulating the passage of time it would once take to go across the room and turn the vinyl over to hear the second side), it truly felt as if the band firmly had the audience in the collective palms of their hands. For those who have seen this collective in the past, they were already well versed in the secret. But as for me, a Madison Mystery Tour novice, now I understood what a unique event this actually was and it was all simply due the purity on display.

There was nothing prefabricated about this concert. Nothing false in its intent or execution. And that purity fully translated to the audience as a whole and to myself as an individual. The sheer amount of positive feelings that were so much in evidence throughout the Barrymore were of such gentle yet enthusiastic enormity and it all spoke to the reason that all of us were in attendance, from the musicians to everyone in the audience.

What is that magical alchemy that arrived when John Lennon, Paul McCartney, George Harrison and Ringo Starr joined forces as The Beatles? It is inexplicable and it is indeed a mystery that can never be fully solved. And yet, we all still analyze as we regard each other, people of differing backgrounds, ethnicities, genders, and generations who have each found themselves moved by this music, making powerful yet fully individualized connections yet it is music that has transcended all boundaries over time and space.

The joy I felt with being joined by several children including, Jane, a 14-year-old high school student who knew every single word to all of the songs, was as inspiring as seeing the music stands complete with sheet music on the stage. The music brought us all together as we were joined in song, in memories and in the present with each other.

How many artists can one think of to achieve this feat to this voluminous degree? 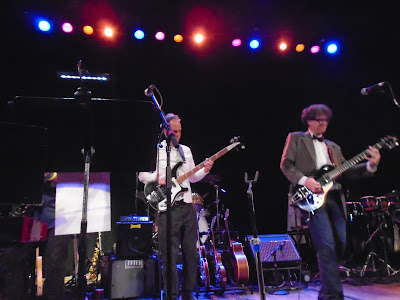 Again, as with the album, Madison Mystery Tour returned to the stage to perform Side Two, leading off with a rich, succulent "Here Comes The Sun" followed by the ethereal, multi-vocal lushness of "Because." From there, the band locked in tightly and somehow, miraculously performed the entire magical suite of Side Two beginning with "You Never Give Me Your Money" and flowing like the river into the sea as "Sun King," "Mean Mr. Mustard," "Polythene Pam" and "She Came In Through The Bathroom Window" all were performed with jubilation and grace.

Taking a breath, the band then continued onwards and upwards with the album's emotional wallop, "Golden Slumbers," "Carry That Weight" and the guitar and drums fireworks of "The End," before singing off of the album with the greatest album ending grace note ever (as far as I am concerned), "Her Majesty." 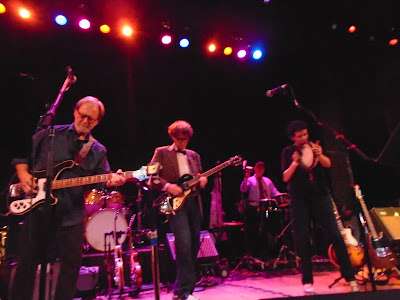 They did it!!! They really did it!!! Did everything go off without a hitch. Well, no, of course not. Sometimes, bum notes were made. Sometimes, cues were missed ("Because" was actually performed twice to correct an error). And yet, Madison Mystery Tour had fully earned the audience's good will and adoration as their (again) determination and devotion to giving the music of The Beatles their complete reverence was deeply felt throughout the Barrymore. 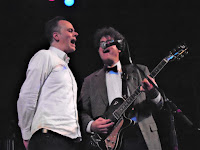 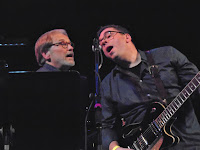 Taking in that energy, the band launched into a post album victory lap including a preview of next year's "Let It Be" 50th anniversary show with a stunning "Across The Universe" plus some late period rave ups like "Old Brown Shoe" and "The Ballad Of John and Yoko" before finishing with a downright glorious "Got To Get You Into My Life" starring possibly Sean Michael Dargan's finest vocal of the night...saving the best for last! 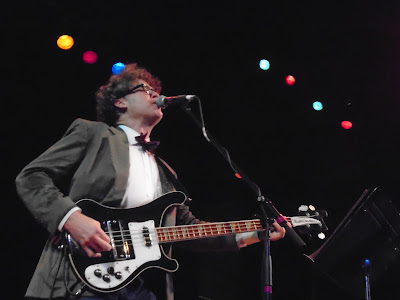 At this time, I wish to air my regrets for not knowing every band member's name so that I could properly bestow credit to everyone on the stage that night. But I do wish to shine a vibrant light upon singer, guitarist, keyboardist Aviv Kammay, the man who created this group and conceived of this on-going venture to celebrate The Beatles and the fullness of their artistic legacy with tremendous affection, diligence, tenacity and just pure fun!! 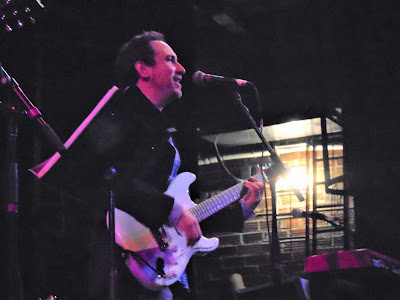 You know, many years ago when I was an avid viewer of "American Idol," I remember that the show would occasionally have a "Beatles Night," an evening when all of the contestants would be challenged with performing the music of The Beatles. Those nights, I remember always seeing the contestants at what felt to be their most challenged because they often struggled with their performances of those songs, making me wonder just what is it about the music of The Beatles that is so deceptively simple yet so complex that it could upend a grouping of talented young singers?

I think that what I witnessed with Madison Mystery Tour and their top to bottom terrific performance on this night was the very thing that perhaps so many have missed when taking on The Beatles...just sing and play the song!!!

Don't over think it. Just know it. Feel it. And then...just sing and play it as best as you are able. There is no need to re-invent the wheel. The Beatles already did that, time and time and time again to the point where 50-60 years later, we are all still trying to figure out just how they did it and we are all still as enraptured as ever.

All we have to keep doing is just sing the songs. And sing they did...beautifully so!

I am so ready for next years show! 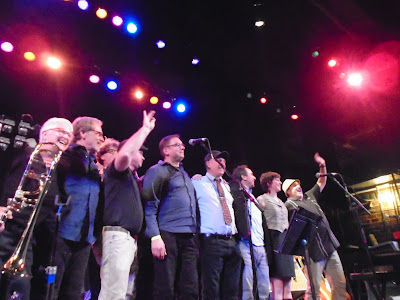